The place I am from was one in which a large amount of the police, firefighters, and city workers settled with their families because it was possible there to have a backyard while adhering to the requirement of living within the city limits if the City of Chicago signed your paychecks. It was a strongly communal place to live that was predominantly Irish-Catholic, where everyone aggressively knew each other’s business and where people actively cared for each other, if in a hard-nosed fashion. It was active, idyllic, gritty, and real.

And when I was growing in Beverly, the dozens of friends and family who were closest often saw our home as the one whose family parties had the best food, whose home was somewhat opulent and decorated in just such a way. This may have stemmed from the fact that we were the only family that maintained Polish traditions, and therefore, served pierogi and kolackzi and kielabas w kapusta. Tak, to jest bardzo smaczna jedzenie.

But there’s something else behind the attraction of our home, that’s only recently came back to me as I was refinishing a dresser at my Old Town apartment during this quarantine.

We did everything ourselves. All the beauty, the deliciousness, the elegantly furnished XYZ–my family legitimately put effort into the details that stood out.

While it is true we may have been slightly better off than some families, my mom, dad, grandmother (my mom’s mom a.k.a. moja babcia), and my uncles and other relatives–they put the work into the home that made it different.

One of the standards of beauty in the house on Fairfield was the finely finished wood staircase, with a strong satin banister with ornate wood vertical railings–they were hand-carved by hand by my grandfather, moje dziadzu. The wooden stained floors of the stairs and throughout my house were re-sanded by my father–only after we realized they were there underneath the gaudy 1950’s lineoleum that covered the floor throughout house.

The food for those parties, nearly all of those foods were hand-made by my mom and babcia. The dough for each individual kolaczkek (aka flour pastry with filling) was rolled and re-rolled, a undertaking whose time frame for each party likely started weeks ahead of time, the number of actual “man hours” measured by the dozens.

The playhouse in the back yard–that was constructed by my dad and dziadzu from wood from Fox’s Lumber, just a few miles away. There were no plans. They both generally knew what a house was supposed to look like, and they approximated a smaller version, and built one.

The deck in the backyard was hand built by my dad and my Uncle Mike and their buddies from the International Brotherhood of Electrical Workers Local 9. I specifically remember fetching beers for my dad’s buddies, confused about the difference between beer and root beer.

And then there was the windmill, my dziadzu’s extravagant tour-de-force in intricate woodworking, hundreds of pieces crisscrossing with delicately milled wooden flowers giving a touch of springtime ethos, and even a miniature staircase that led to a door where we hid the spare key to the backdoor for years. This piece was so beautiful that, when my parents moved to the suburbs decades later, long after my grandfather had passed and my sister and I had grown up, much thought was given to how it could be transported, what could be done to preserve it.

Hell, even growing up our toys were handmade–my sister had beautifully-detailed, functional dollhouses, with thatched roofs and neo-gothic styles.

Trying to prepare me for some sort of war, my grandfather hand-carved wood swords much in the same style as those banister railings, just thick enough that they would most definitely smart when I whacked people in the shins.

I can legitimately keep going; the complicated wood deck-chairs were made by an firefighter neighbor years after my carpenter grandfather passed away.

The artwork in the house and even the murals on each child’s bedroom were my mother’s own free-hand painting. Every piece seems to be built by someone we closely trusted. The place was seemingly just a framework on which each adult in my life carved a little piece out to ply their trade.

All of this came flooding back to me as I was nearly completing the refinishing of a dresser I’ve had for the last half dozen years.

I’m 70% of the way through refinishing my gaudy but functional white dresser into a tone that is more understated. I’ve taken the time to sand each of the four drawers and the whole four-foot tall piece of furniture, and it had definitely helped me pass time and relax during this silly quarantine. 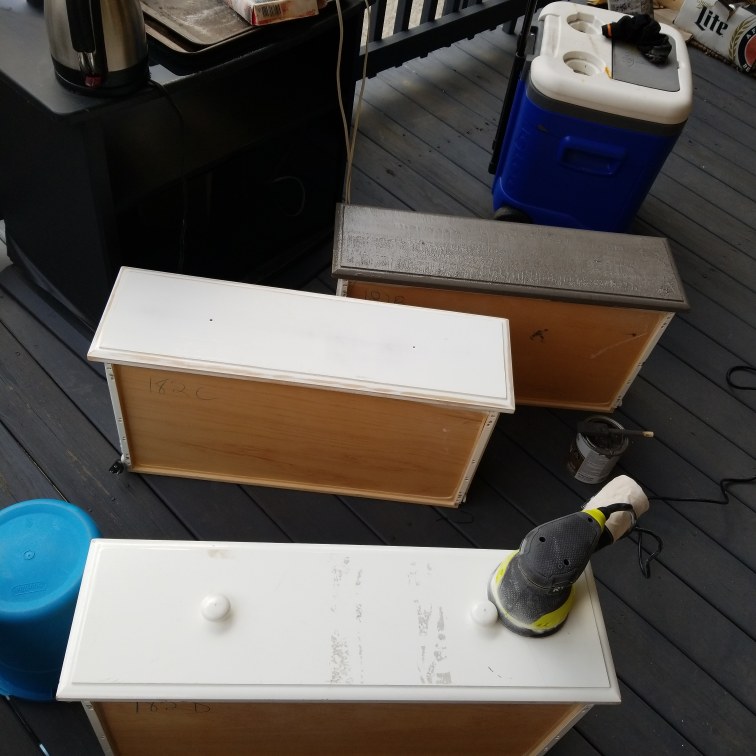 The mental picture I got when going through the second paint of coat on the dresser, the way paint accumulated at the bottom, right where a child-version of me might have sat brought up past visions of re-painted furniture.

While I certainly don’t believe in the metaphor of pulling yourself up by your bootstraps, or in the impossible-to-obtain levels of self-sufficiency which many parts of our society advocate for, I do have to say, there is something to be said in doing it yourself.

There something to be said about sanding and repainting this dresser that gives me a sense of accomplishment, a serious connection to transformation of a physical object, one that will be better suited to serve its purpose, even if that purpose is only holding my clothes.

There’s something to be said about, instead of going to Ikea (or during quarantine, heading to Ikea.com) looking at the pieces you have around you, and wondering how you can put effort into those possessions to make them better and, in the process of adding your labor to them, wondering how that effort makes them more yours.

Hell, there’s something to be said about, if it was possible or easy to obtain materials right now, building your own dresser, by yourself, from scratch. A tangible example of this for me: for his own wedding a few years ago, a close friend in Connecticut build the tables his own wedding party from scratch; I used to think that task was Herculean and otherworldly, but now it makes sense to me. It was probably relaxing.

Getting through the quarantine is not going to be easy. Managing the recovery and holding onto yourself through isolation, altered social norms, instability at work, and the awareness of a mass amount of other people’s struggling and pain–that’s a monumental task, a definitive change in the way in the world was operating.

But the task at hand isn’t going to solved by thinking about it. People’s jobs won’t be saved because you read economic forecasts (unless your in finance or banking). The disease won’t go away because you understand the nature of its virality (unless you are a doctor, nurse, or public health official).

This is the type of scenario, one that our grandparents had to endure often and our parents maybe sometimes, where just paying attention to the tangible work at hand is going to steady our minds. It’s the type where focusing on woodwork, on perhaps cooking or baking, on knitting or just creation of something is what feels best.

I could go on and on using my family as an extended metaphor, a lesson in focusing on the moment, and say more about how my grandmother’s attitude towards hiding refugees from Germany’s occupation of Poland is some sort of grand approach we should take, but on the few occasions I’ve spoken to her about it, the few times she’s actually dug into her memory and recalled details about the perspective she has on a tragedy that happened nearly a century ago and a continent away, she’s never had what might be called “wisdom”.

It’s never a big deal, there’s never anything more than, “Yes, I remember we hide people, mostly Jewish people, in our barn before they run into the forest nearby. They only stay a night or two, and your pra-dziadziu (great-grandfather) would give them maybe bread and milk.”

And before I would always blink and wonder what I was missing.

Movies and books always made the resistance become the Resistance with a capital “R,” made people fleeing from the Holocaust appear as if every single person involved would stop while the atrocities were happening and ask strangers, “Can you save us from the Holocaust?” or, for us, “Do you know how to combat the COVID-19 virus” As if the occurences were a tangible, scheduled, defined event they/we knew was most definitely occurring at the time, one that we tracked coming and going like a train.

No, in those scenarios where people found themselves in history book moments, like the COVID-19 one where we are now, there isn’t an announcement. There isn’t a barrier that time obviously tracks over, after which the scenario is definitely the historical moment. There isn’t anything even particularly different. Time just passes and the circumstances in which people live, the rules people follow, they are different. The tasks we accomplish, they just happen.

And, to get ourselves through, we cook, and we knit, and perhaps we fix up furniture like I am, like my family did throughout my whole childhood, in the hopes that the salvageable beauty of the creations we are working on will occupy our minds long enough to let the moment pass, and further, to give ourselves the sensible dominance over something material in a moment when not much seems certain.

We get to experience the moment, the intangible sense of ownership over the objects in our immediate vicinity, the barrier between you and the troubles around you, the sense of space in the object you created.

And in the time of social distancing, when finding validation through others is hung up and on hold, that sense of oneness with your medium of creation–that’s the sense of creation that will get you through. Just like your grandmother might tell the story that in XX troubling scenario, your family did YY sensible and tangible thing, you can come out of this saying,”When I was stuck inside because of corona, I fixed up furniture. I ended up doing that for years, and saved a lot of beautiful craftsmanship from being trashed.” That’s my aspiration right now.

Maybe yours is: “When the virus hit, I baked cakes and treats for my friends.”

Even better, maybe you’ll say: “In times of corona, all I did was make masks for hospitals.”

Perhaps, if you are lucky and brave and resilient and skilled, “When people got sick, I was a doctor. I was a nurse.”

People who didn’t experience what you did will have more questions, and you won’t be able to sate their curiosity. It won’t compute. They will want it to be bigger.

But the strength will be all your own.